The Castle and the Lords of Brederode

The origin of Brederode Castle

The House Brederode was a noble family, who descended from the Lords Of Teylingen, who would again descend from the Counts of Holland, although there are doubts about that last fact. Dirk van Teylingen (also called Dirk I van Brederode or Dirk Drossaat), a younger brother of William van Teylingen, is seen by historians as the founder of the House of Brederode, although this is not entirely certain. In 1226 he was appointed as a landdrost at the court of the Count of Holland and, in the absence of the Count, had the Count’s authority by proxy.
The Counts of Holland continually fought against the surrounding regions. Count William II was killed in a battle with the West-Frisians. His son Floris V took revenge, defeated the West-Frisians and built a number of strong castles to prevent further uprising.

One of these castles, Brederode, was built at the end of the 13th century by Dirk van Brederodes son William (2nd Lord) and his wife Hillegonda van Voorne. The castle was situated in a strategic spot on an offshoot of a beach wall and surrounded by water, swamps and peatland, close to the Huis te Aelbertsberg. This hunting farm of their loan lord Count Floris V, was probably located at the present-day Caprera near Bloemendaal. William was, as well as many of his male offspring, bailiff (a senior civil servant) of Kennemerland.
His granddaughter Catherine married John I of Polanen and became an ancestress of the House of Orange, the present Dutch royal family. One of the titles of the Dutch monarch, King Willem-Alexander, is Lord of Polanen. 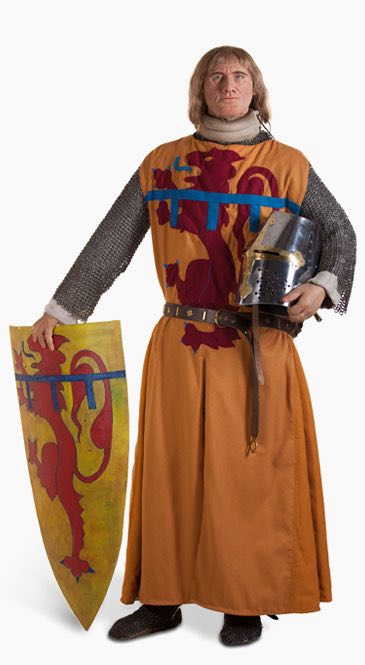 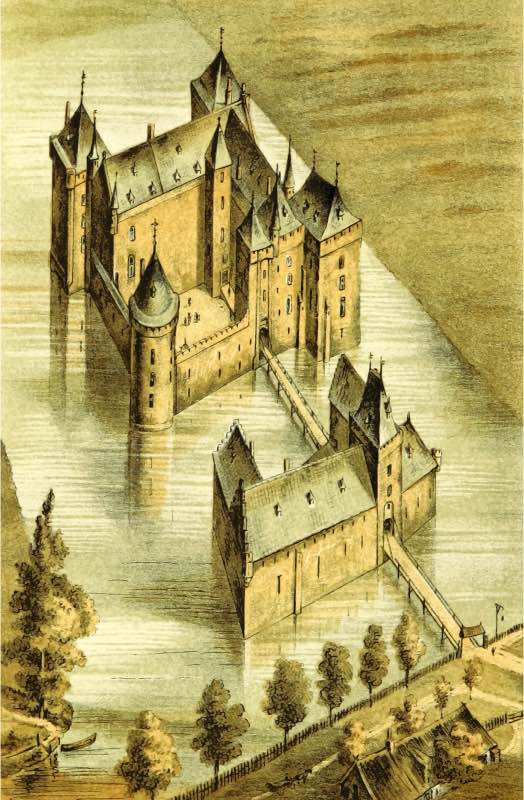 The Castle destroyed for the first 2 times

Around 1350 a battle broke out to the county of Holland between Margaret of Bavaria and her 13-year-old son William V. This was the beginning of the Hook and Cod Wars. Dirk III (5th Lord) chose the side of Margaret and became the captain of de Hook faction. Dirk was defeated by Gysbert II of Nijenrode and captured and Brederode Castle was destroyed. Three years later Dirk was released and in 1354 he rebuilt his castle. But the Hook and Cod Wars continued until the end of the 15th century and in 1426 the castle was destroyed again. This time by the Cods from Haarlem.

From 1414 onwards, the Lords of Brederode used to live at Batestein Castle in Vianen, after the marriage of Walraven I (8th Lord) with Joanna of Vianen.

Reinoud II (9th Lord) made the north side of Brederode Castle habitable again in a slimmed-down form, as a nobleman’s house, around 1464. After his death, his widow Yolande de Lalaing, who was the daughter of William de Lalaing, stadtholder of Holland, moved into the castle. She would be the last occupant, until 1492. The castle was damaged by German mercenaries during the ‘Bread and Cheese Revolt’. Habitation was no longer possible. The final blow for the castle was in 1573 after the siege of Haarlem by Spanish soldiers during the Eighty Years War. The castle turned into a ruin. 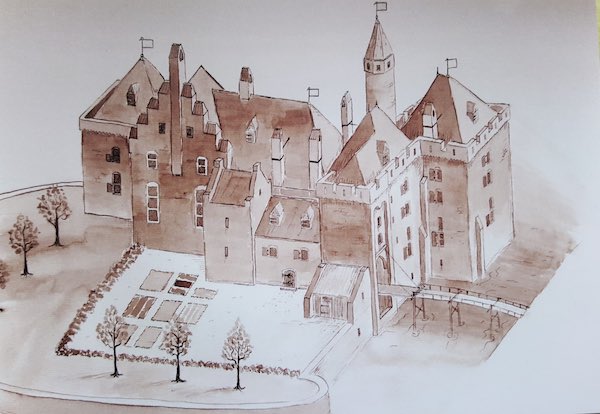 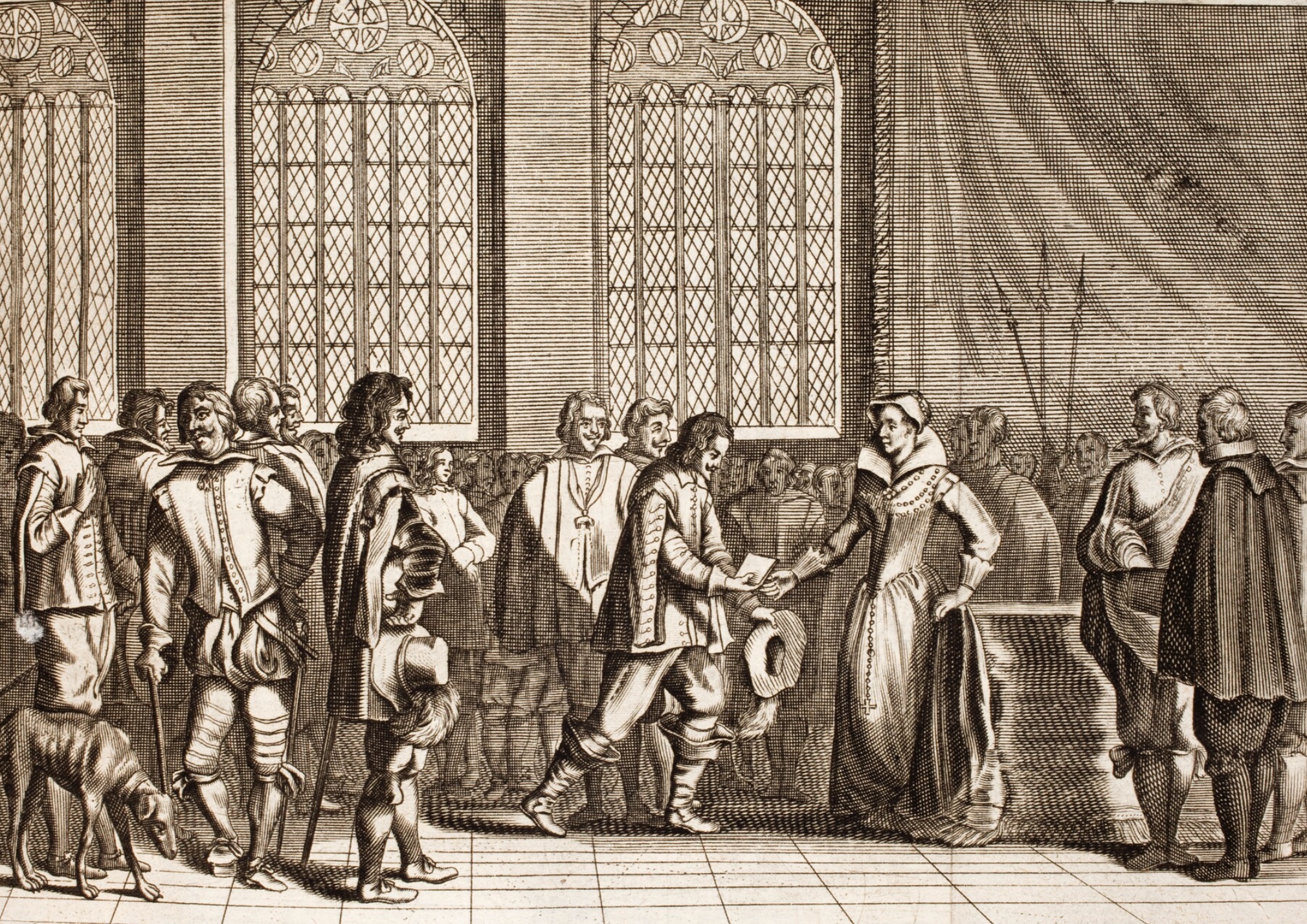 However, the Lords of Brederode continued to play an important role in the Netherlands. Henry II, the Big Beggar (12th Lord) was the leader of the rebellion in the Low Countries against the Spanish King Philip II, even before William of Orange joined the fray. In Batestein Castle ‘The Supplication of the Nobles’ was drawn up against the Spanish Inquisition and offered by Henry to regent Margaret of Parma. The nobles were called ‘Gueux’, French for Beggars. Some days later Henry said: “When they call me a beggar, I’ll be a Big Beggar (Dutch: Grote Geus)!” From that moment on, ‘Geus’ became an honorary title in the Netherlands. It was the prologue of the Eighty Years War, the Dutch independence war, which erupted two years later, in 1568. The half-brother of Henry II, bastard Lancelot van Brederode, fought during the Siege of Haarlem on the side of the insurgents. For seven months Haarlem was seized by the Spaniards. Because of starvation of its inhabitants the city was forced to surrender and Lancelot was beheaded.

The Last Lords of Brederode

The most powerful and richest Brederode was Joan Wolfert (16th Lord). In the 17th century he was commander-in-chief of the State Army and brother-in-law of the Prince of Orange, Stadtholder Frederick Henry. During the Eighty Years War, Joan Wolfert had a large share in the conquest of a number of cities on the Spaniards, including ‘s Hertogenbosch. Between 1630 and 1655 he was governor of this city. The land ownership Brederode Castle gave Joan Wolfert access to the knighthood of Holland. He thus received a vote in the States (then the Government of the Dutch Republic).
The Brederode family lived alternately on their estates scattered throughout the Republic. In The Hague they first lived on the Lange Vijverberg and later in the Hof van Brederode – on the spot where the Royal Theatre stands nowadays – the meeting place of the 17th century Hague elite. 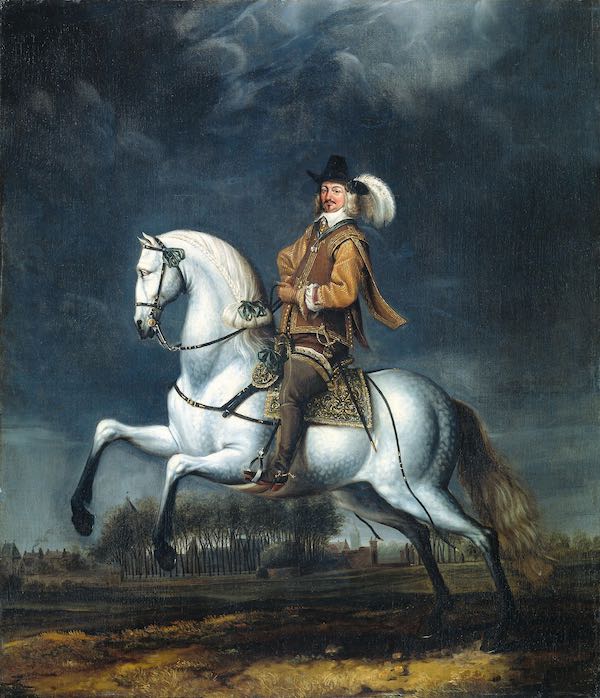 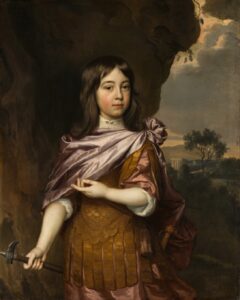 Joan Wolfert’s youngest son Wolfert was the 18th and last Lord. In 1679, at the age of 29, Wolfert died childless. There were no legitimate male successors, which meant the end of the noble Brederodes. The shield with the coat of arms of Brederode was broken and laid into Wolferts grave. Brederode Castle became the property of the Dutch Republic and later of the Dutch state.

Small farms were built next to the ruined castle and the farmers used the former storage rooms as stables. Brederode Castle became a beloved subject for painters like Andreas Schelfhout and Piet Mondriaan.

In the 19th century Brederode Castle became one of the first national monuments of the Netherlands where experience with restoration was gained. The restoration was carried out by Pierre Cuypers among others, architect of the Rijksmuseum building and the central station, both in Amsterdam. Nobody knows how the castle looked like. Nowadays we know mistakes were made during this restoration. For instance, the courtyard was dug out too deeply, because they wrongly thought there had been cellars underneath. There are also embrasures in the walls around the courtyard that originally never were there. 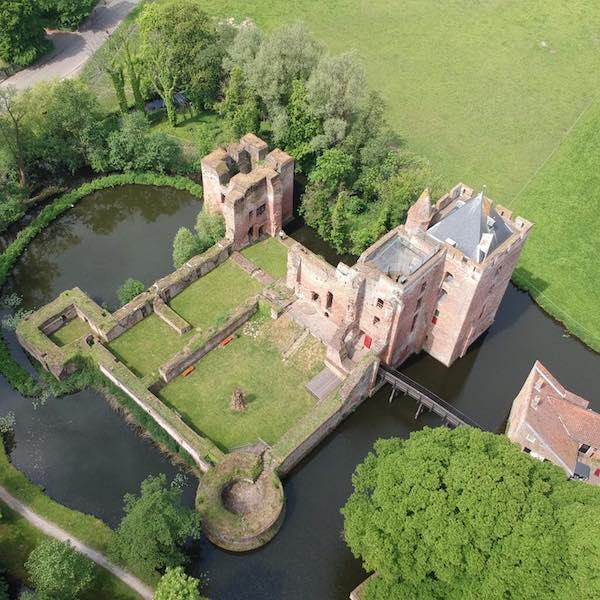 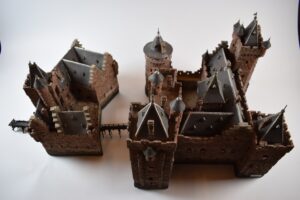 During Pentecost 1944, a propaganda film for the Nationale Jeugdstorm (NJS) was shot at Brederode Castle. This film was titled ‘Strijders der Toekomst’, Dutch for ‘Warriors of the Future’. The actors were members of the NJS. The then managers, Mr. and Mrs. Van der Kort, must have been very cold-blooded during the filming, as there were also Jewish people hiding in their house at the premises of the Castle at the time. In the book ‘Velsen Bezet en Bevrijd’ (Velsen occupied and liberated), written by G.G.E. Hartendorf, you will find description of the Castle during wartime. Click here for the chapter (in Dutch).

Nowadays, many descendants of the Lords of Brederode still live, but only in the female and bastard lines, see website www.huisbrederode.nl (Dutch) from Rob Hubert.

The castle has been owned by Monumentenbezit since 2016, is managed by the manager and volunteers of the non-profit foundation Stichting Heerlijkheid Brederode and is open to the public from March to October. 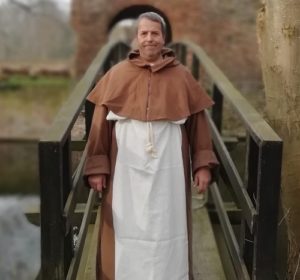 The 18 Lords of Brederode